Fusion Informatics is one of the award-winning mobile app development company in Dubai, UAE. At our company, we follow the best approach to make sure that we deliver excellent quality mobile apps. Our standards to satisfy our clients by filling they're as per business requirements and being best in mobile applications development Companies in UAE, US, UK, India.

Flutter is the latest Google open-source platform and it uses a single code base for developing native Android and iOS applications with a single codebase. It is more than a framework and it has everything you need to create cross-platform apps like whole software development kit. Many app development companies use this platform for developing applications. Let discuss the advantages and disadvantages of flutter in mobile app development 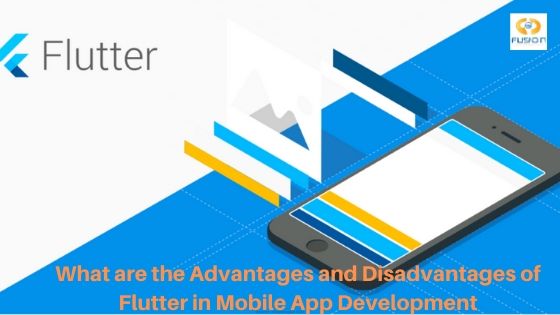 Many factors have an impact on the application's performance such as CPU, frame number per second, average response time, request number per second, etc. Flutter has a stable 60fps, which indicates the level of a smooth and transparent image on contemporary displays.

Developers are trying to keep going at this pace since the human eye can detect any lag in this frame rate. This system was up to 220 milliseconds launch time and 58 fps compared to React Native and Xamarin.

Google offers integrated opportunities to create applications accessible to a wide range of users by advocating for inclusiveness and diversity. Usually, you want to get the software ready for localized content, when your application operates in various regions and languages. This is called internationalization.

Flutter provides widgets based on the Dart intl package for mobile development, which makes the process easier. Now 24 languages, measuring units, layout options, currencies, and dates can be supported.

Hot Reload function is embedded with flutter architecture for instant updates and there is no need for plugins. Utilizing hot-reload function, updates can be seen in real-time. The framework allows you to fix an error when you run the code and carry it on without restarting it.

If Deployment takes many minutes, return to normal programming can be problematics. Hot reload improves your productivity, enables experimentation without long delays and helps with quick iterations.

If learning Dart is simple, it will be easier to get acquainted with this tool. Many people with little coding knowledge can use this framework to develop prototypes and apps. For utilizing this, you don't need experience in mobile app development.

In addition, Google is famous for developing detailed and well-structured documentation that React Native has problems with. These documents, as well as video lessons and practical lessons for Codelabs, are also available. The Udacity and Udemy are providing the courses and you can join in Facebook communities can

This software uses widgets that already designed. The tool aids you to design a user interface with these building blocks. While several methods use various objects such as controls, views and templates, it has a single object model. In this method, that object is a widget, which includes text, buttons and padding. You can combine widgets to build layouts and can prefer to use widgets at any degree of customization.

In this framework, widgets are arranged in trees that help in the rendering. However, the complete structure can be excessively sophisticated. For big applications, ten layers of code are required to form a basic object. So there should be proper planning of structure is needed in advance

Since Flutter was created by Google for mobile app development, developers are right to be concerned about the implementation of iOS. Google has a direct interest in fixing bugs quickly, it's fun to create Android apps on the frame. The last update of this tool is a pixel-perfect iOS appearance

In this framework, ios settings have been created to permit Cupertino widget. But these and other design features have been updated later, using iOS 10 functionalities, even if iOS 11 was released. It is not clear therefore if updates are published as soon as the Android version is released after the software has entered the beta stage.

Developers use large lengths to reduce the size of an application. Users have limited mobile memory, and it is more beneficial to release an app that prevents you from removing it for your favourite images and songs. Usually, programmers avoid compact pictures and reduce the number of packages and libraries to decrease code size.

After the Hello World app hit 6.7 MB, the system has been massively disappointing the developers even though it has fallen to 4.7 MB. The size is bigger when compared to Kotlin, which is 550kB and the original Java, which is 539kB.

On their learning journey, not many novice developers will find Dart, and it can be difficult to obtain new developers for your team. This is a necessary aspect when a cross-platform solution is being taken into consideration.

So I hope you find the complete information about the pro's and con's of flutter in mobile app development and it is best for people who are looking for a development tool that has a mild learning curve, extraordinary performance, accessibility and internationalization, available widgets, and quick updates.